Improvements to the UI in the Duel Room 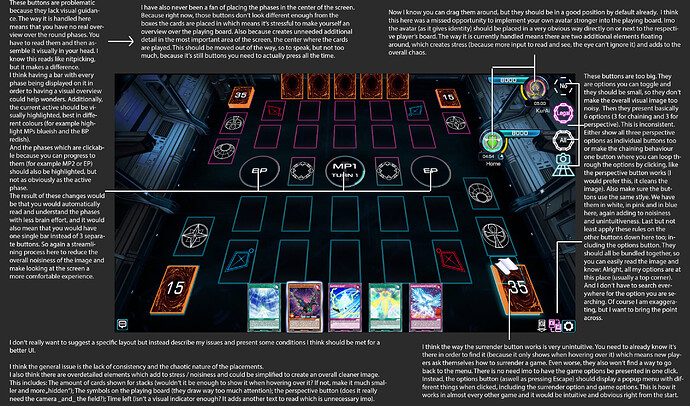 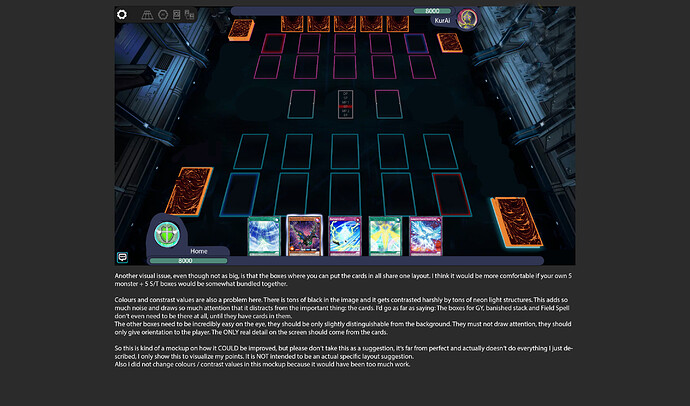 Ok so there’s a lot of stuff to swallow here so I’ll address each thing one by one.

Overall, you need to understand UI design is like cleaning your room. The room looks clean with less things in it. That is why when removing information from the visible screen, it removes options for the user to process. Less things for the brain to think about makes it more comfortable to interact with right? Yes, but we cannot compromise function for form. The solution to UI design isn’t to make things smaller or to simply remove them. It’s how to organize and arrange it. The information has to be presented, but how we present it is the question.

I forgot to reply to the second image you posted.

I like your mockup but I don’t like the phase selection in the center for the reasons I said - very bad for mobile. You can’t tap with a finger on what phase you want from a dropdown like this. This even creates opportunity for misclicks on the pc. I like how you positioned the LP bars. However, the reason we don’t already have that is, because of the code. In a duel, there is a host player who hosts the duel and then the player that joins that duel. The core doesn’t care who is player or opponent. Rather, the host is always Player 1 and the other player is Player 2. In ranked, this is randomized. So it is not easy to position the LP bars to make it correspond exactly to what the players are.

As I said, your mockup for LP bars is good, but this also creates a restriction for other players who don’t want it like this and want to move the position. The LP bar does not need to be this wide. Also in your mockup, you moved the extra deck upwards to make space for the LP bar. This isn’t good for when the Field Zone is activated, then the Extra deck moves down. The goal here is basically to have the LP bars closer to the hand which I agree with but not the way you have shown.

I do like your toolbar that you made on the top left. That can work if it expands and collapses which will work on mobile and is a great way to reduce space without reducing information.