Everytime I put the skill card “Shifting Up” in my deck when I tried doing vs. AI match, a pop-up “2 parameters are needed” will be shown. The skill cannot even be used even when I have exactly three LIGHT monsters on the field with one with a different level. Another thing, when AI has legal moves to play during my turn, they won’t even play it and that I will win by time limit.

Build a 30-card maximum Galaxy/Photon deck, using cards played by level 40 Kite Tenjo in Duel Links, including Galaxy Soldier, Galaxy Knight, and Galaxy Eyes Photon Dragon. Then put the skill card “Shifting Up” in the main deck. Play against AI, with the parameters below:

Add Random Bot, play against it. During your turn, special summon Galaxy Soldier. Pop up “2 parameters are needed” will be shown shortly after. Continue playing, the pop up will constantly appear, and when your opponent has a legal move they will not do anything until the time runs out. You can do nothing as well, and surrendering will be your only option. 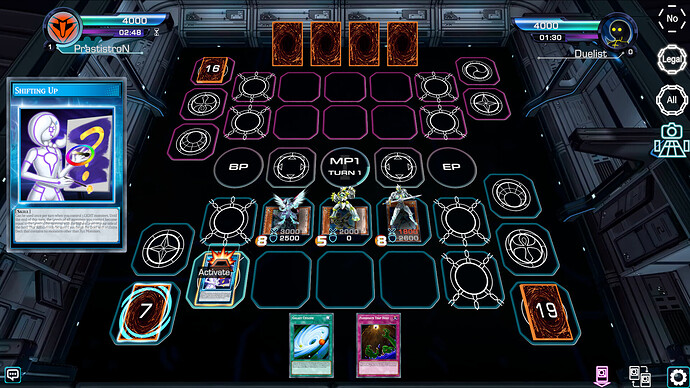