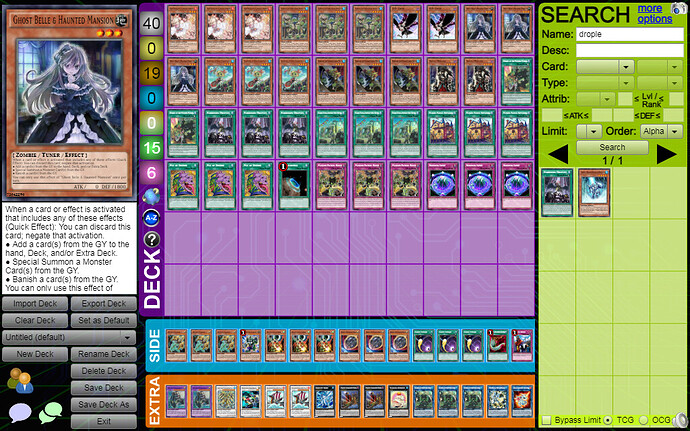 This is the list I’ve been playing for this month.

Plunder Patroll is a deck that I just love playing, as a former crystron main since that deck came out, a deck that does the same kind of thing but better and has better payoffs just really hit me right and been playing it none stop ever since.

With the new support in the form of the birb on the horizon the deck will definitely look different by then but in my eyes not by much, the deck will still do what it does best, set up little bit of presence in turn one, then in the course of the opponents turn, you will be morphing and creating the disruptions around what your opponent does and… well what attribute you can get out of them. this leads to a lot of things to learn from how to get good with the deck. I’m not saying I am like the best plunder player of all time, however i think I would have enough experience to at least be knowledgeable.

First thing you need to know about the deck is well. The deck, get used to the playstyle and get used to the mild frustration your opponent will give off when you are doing 60-70% of your plays on their turn. By that I mean OUR turn.

Secondly, get used to knowing what your opponent plays and how to exploit its choke points. This will lead to strange plays on the surface but can become apparent later on, an example i can give of the top of my head is by putting a redbeard/whitebeard in the same column of my opponents EMZ when I know my opponent is playing drytron, the drytron player will be more inclined to summon Relinquished Anima (Dark attribute) where apart from that the entire deck is light monster turbo, so by doing this you are enabling yourself moerk access in a what would usually be a lys only game.

Thirdly. the deck as of right now has only got 23 main deck stays so you basically have 16 flex spots, these spots are what will change from format to format so dont be afraid to chop and change to be more effective to what you are expecting to be against, even then the 23 main deck staples can change around you could play 3 shipping and 3 emblem to you would have 15 slots, personally this is how I’ve been enjoying them at 2, doesn’t mean it is the way to go forward play around see what works for you.

now ima talk about what ive chosen for my flex spots.
Ash. just generic good hand trap right now.
Belle. with drytron, VW and a lot of rogue triying to do some stuff in the gy, this is just all round solid as well, very rarely comes up dead but if it does, just side out.
meister, same as bell however this one has the added ability of being 2200 whilst brann is on field.
desires. i play a lot of 3 offs and i dont really care of banishing 3 copies of card, unless whitebeard and field spell then yh that hurts but that is REALLY rare.
summon limit. now i know this makes the deck about as fun as licking sand paper from time to time but you need to do some unfair stuff to beat an unfair deck.
droplets, pricey IRL i am aware and this can be changed out, however dragoon is still lurking and if you dont have any way to keep him in check you will be sorry, this could be anything from IDP, cosmic cyclone to even kaijus if you feel spicy.

the extra deck is fairly standard except the addition of the formula, halq and crystron big man. This is a 2 card combo revolving around whitebeard and… any other monster but usually blue beard/goldenhair. you summon halq, cl 1 white summon redbeard, cl 2 halq summon ash/belle. this alone on opponents turn can l;ead to you summoning form synhcron on opp turn (watch out for that when clause when trying to get the draw) redbeard summoning a ship cl2 formula to synchro, formula will get you quariangandrax, redbeard gets you any ship you can summon, on a new chain crystron man will bonk 3 guy on field and/or GY whilst redbeards gonna get back in his boat where he belongs. this is just one avenue of many for this deck, you could end on toad blackbeard pass, you could end on miraj and brann with emblem equip for them cheeky sky striker match up,

Overall, I have spent too many hours on this deck my therapist has told me to start playing another deck after I’ve started making too many One Peice references help.