As an example, Awakening of the Possessed - Nefariouser Archfiend can be Special Summoned from the deck by its non-activated effect, by sending 1 Spellcaster monster and 1 EARTH monster to the GY.

In order to Special Summon Awakening of the Possessed - Nefariouser Archfiend, you must click on your deck and then click on this card. However, you can change your mind and close this view without Special Summoning any monster. This gives you information about this card’s location in your deck.

At this time, the complete list of relevant monsters is as follows: 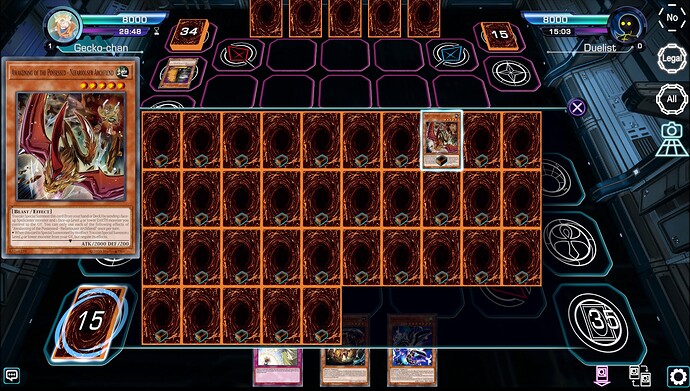 When the conditions are met for a monster to be Special Summoned from the Deck by its own effect, an icon/button should appear over the deck. Clicking this icon should display a list of monsters that can be Special Summoned from the Deck. This would avoid revealing those monsters’ locations in the deck, and would still allow the player to cancel the action without gaining inappropriate information.

An alternate solution is to continue displaying the deck contents as shown above, and eliminate the player’s option to cancel the action without Special Summoning a monster. This is less favorable since players can be locked into an action. On the other hand, it would be consistent with play at real events, where a player would not be allowed to view their deck and then place it back down without Special Summoning the declared monster.

In all ygopros, the position of the card is sent. You can see this even in edopro as it places the number position: