Ever wanted to play some Yugioh without the possibility of playing against an FTK, Floodgate, Burn, Extra-Link, or Hand-Loop deck? Trinity is your best bet. With monthly tournaments and an active Discord community, there’s no better time to get started in Trinity! This article concisely covers everything you need to start playing straight away.

Getting Started: The Rules

There are already countless in-depth articles and videos covering the rules and philosophy behind them, but they’re actually extremely straightforward: There’s a Summon Limit, and a Card Limit.

Neither player can Summon more than 3 Effect Monsters each turn.

This is how Trinity vanquishes the possibility of FTK and 20-minute long combo decks in the format. You know the physical Field Spell, Summon Summon Gate? Imagine that the card is always on the field, except that it counts all Effect Monsters, rather than just ones summoned from the Extra Deck. All of the TCG rulings associated with the card apply here, so there’s really nothing else you need learn!

People often ask why this rule exists, and why specifically it’s three monsters rather than any other arbitrary number. The Summon Limit slows down the game such that resource management is now much more important. As a result, Trinity Duels last the same amount of time as TCG ones (sometimes a bit longer) – But instead of spending half of the Duel performing a combo, Trinity Duels take up multiple turns of decision making and player interaction. The number 3 was chosen because that’s the number of summons needed to perform a bread-and-butter Extra Deck play: Summon two monsters, use them to make a Synchro/Xyz/Link Monster.

Usually, you can’t have more than more than 1 of each card in your Deck.
Minimum Deck Size is 30.
For every extra 5 cards in your deck (above 30), you get 1 Point that can be put towards extra copies of unlimited cards, or powerful cards off of the Banlist

This is the rule that people often get stuck on, but it’s really very straightforward. Here’s an example of a typical Trinity deck, to show you what decks generally tend to look like: 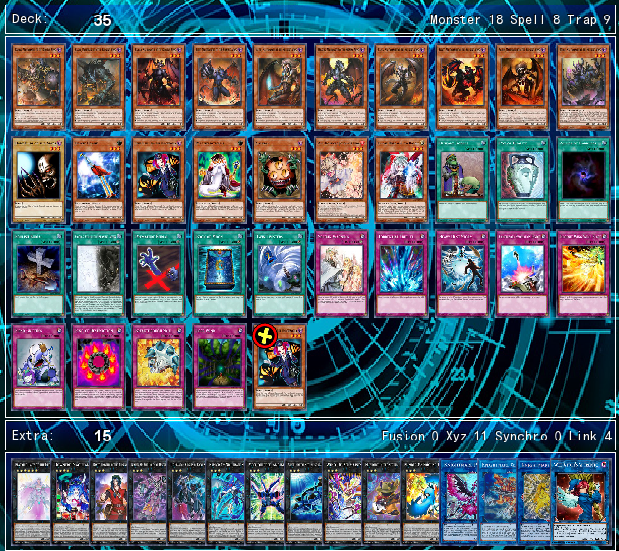 As you can see, every card is a 1-of, apart from Tour Guide from the Underworld, which is our “Trinity”, which costs 1 Point. We’d be allowed to play just a 30-card deck if we only included only one Tour Guide, since the minimum deck size is 30. Here, I’ve chosen to play a second copy. To do so, we added an extra 5 cards to the deck, making it a 35-card deck. Additional cards, such as this Tour Guide, are often referred to as “Trinities”. If we wanted to add a second Trinity – For example, yet another Tour Guide, or another copy of Dante, Traveller of the Burning Abyss, we’d need to add another 5 cards to the deck, making it a 40-card deck.

Why does this rule exist? Well, the Highlander nature of Trinity is something that many players enjoy. At an absolute minimum, you have 30 different main deck choices to make. In a 40-card TCG deck, where most cards are 2- or 3-ofs, you only have 15-20 choices to make. This makes deckbuilding more involved and helps to make every game fresh and different. If you’re mad about consistency, the option to play 30 cards can help you reach those perfect consistency goals. However, it’s actually more common to see decks in the 35-card to 45-card range, in order to add a little extra power to your Deck.

The Trinity Banlist doesn’t feature Limited or Semi-Limited cards, since that wouldn’t make too much sense in a format where every card is inherently at one. Instead, we use “1 Point”, “1/2 Point”, and “Unbound” cards to regulate gameplay. Take a look at this deck: This is a 40-card deck, which means that it has two ( 30 + 5 + 5 ) Points. Points don’t have to be extra copies of Unlimited cards. They can also be either a 1 Point card (Here, that’s Raigeki), or two different 1/2 Point cards (Here, that’s the Cir and Solemn Strike). if you understand how extra copies of Unlimited cards work, these are just the same.

This deck also features an Unbound playset of cards: Baobaboon. Baobaboon is a card which utilizes another copy of itself. Because of this, if you were only able to play 1 copy, it’d be pretty useless. These cards are listed as “Unbound” on the Banlist. Any deck can have up to 3 copies of each Unbound card for no extra cost. They bypass all of the rules.

With the rules out of the way, it’s time to start playing! If you’re looking for a starter deck to pick up, there are tonnes of them here on Ygoprodeck. I’ll be covering the basics of how to use a Burning Abyss Deck, since it’s a pretty solid meta choice (Burning Abyss never dies, even in Trinity), and it’s a pretty easy deck to play.

You remember the Summon Limit? It means that we aren’t going to be attempting any loops or combos, but instead focus on resource-based gameplay. In a Burning Abyss deck, our first priority is usually to make Dante, or to mill Scarm in order to fetch up a Tour Guide.

If we see a Tour Guide in our opening hand going first, it’s a pretty safe bet to get started by summon it straight away, summon Scarm from the deck, and to then Xyz into Dante. That’s all 3 of our Summons for the turn, so we can then just set some trap cards and pass the turn. If your deck is more mill oriented, you can also use Dante’s mill in the first turn. Trinity games last many turns, however, so it might be better to simply conserve resources and use the mill on a later turn when you need the ATK boost. By setting up a turn 1 Dante, you’ve created a threat that the opponent has to deal with, and given yourself a handy Scarm search for later plays. That’s more than enough that we need to do.

The Burning Abyss lists shown above also feature a sneaky tech card: Dark King of the Abyss. The Summon Limit only counts “Effect Monsters”. This means that you can Summon as many non-effect Monsters as you like in a turn. This allows our Tour Guide to fetch Dark King and Xyz into Dante in only 2 summons. Since we still have another summon left over, you could then xyz into Beatrice, Lady of the Eternal. This is another powerful turn 1 threat for the opponent to deal with.

Past the first few turns of the game, it’s very common to see a bunch of Trap cards being used. Trinity is usually slow and grindy; Trap cards are extremely widespread. In the Mid-game, or anytime the opponent has traps set, I’d suggest holding back on using Tour Guide. Having a TGU get negated is a pretty big setback: If possible, try to find a Twin Twisters to use on the opponent’s backrow, or find a different way to make Dante, such as by using two different “Burning Abyss” monsters to Special Summon themselves from your hand. It’s worth conserving powerful search cards like Foolish Burial for this reason.

Above all, remember that the Summon Limit hinders the opponent from being able to make a huge push for damage. It’s fine to sit back for a couple of turns behind a Mirror Force and just take the damage to buy time. Life Points are a resource that you can and should spend in order to buy time, which can lead you to having more options for your opponent’s plays.

A huge key to finding success in Trinity is to maximize the utility from your cards. Knightmare Link monsters may be masters of Extra-Linking in the TCG, but that’s never the case in Trinity. Here, they’re clean answers to most things, at the cost of some resources. Opponent has some scary backrow? Use your monsters to make a Knightmare Phoenix and blow it up! Some high-ATK monster that you can’t get over? Knightmare Cerberus is man’s best friend. Use the Extra Deck as a toolbelt rather than a way to spam the board.

Another term which comes up a lot is “Tempo”. I’ve mentioned cards and damage as a resource, but there’s also Time to be seen as a resource. The Summon Limit is a hard cap on what can be accomplished in a turn. If you use a Compulsory Evacuation Device on an opponent’s Extra Deck monster after they’ve used all of their Summons to make it, their turn is over. There’s really not much else they can do, other than set some traps of their own. In this sense, Compulsory Evacuation Device is an outstanding Tempo card. It’s often a +0 to Card Advantage, but that doesn’t matter as much when you can spend your next turn progressing your own boardstate.

The decklists shown above are largely examples of bog-standard lists. For the best deckbuilding tips, I’d strongly suggest checking out the Discord. You can also find other people’s archived lists here on YGOPROdeck. If you’re interested in the current tournament-winning meta deck, we even have Monthy tournament reports from our online championships (which are free to enter!). Regardless, Trinity is also the perfect place to brew your own decks! If you’d rather build something from the ground up, here are some tips for getting started.

Trap card are incredibly important. Look at the most desired and typical Burning Abyss play: Setting up an Extra Deck monster in one turn. Most other decks also try to achieve this goal in some fashion. A single trap card can counter everything they’ve done! Blowout cards such as Torrential Tribute and Mirror Force are also useful in this regard, especially as they can generate their own Card Advantage. I’d suggest a full suite of 5-10 traps for almost any deck.

Many newer players are often convinced that “ 30-card decks are the most consistent “, or that “ 60-card decks with 6 Trinities are the most powerful “. However, the best decks are usually the ones which can find a balance between the two. Playing a strictly 30-card deck can often be less consistent than a 40-card variant with multiple Trinities spent on searchers. On the flipside, playing a 60-card deck really stretches your card pool, and you’ll often end up jamming a fair few bad cards into your deck for that single copy of Raigeki.

Not All Points are for Every Deck

Trinity lets you play with Pot of Greed! It’s Semi-Forbidden, so any 35-card deck can play a copy! Well, that’s what most people think. While you certainly are allowed to do this, it’s rarely optimal. Playing two less powerful 1/2 Point cards instead, such as a co-pair of Solemn Strike and Dark Hole, doubles the chance that you draw them. Playing an additional copy of an Unlimited card can be even better, since it’ll directly synergise with the rest of your deck. Tour Guide from the Underworld is a +1 as much as Pot of Greed is, but Pot of Greed doesn’t necessarily guarantee you’ll make a play your deck is geared towards

Credit to Mika/Treetopduelist, who wrote the original article that I simply updated