Number 28: Titanic Moth (Duel Links version), when put in any decks and played against AI always gives an error code “?: -1: attempt to index a nil value (field ‘c53701457’)”. Also, the AI will not play anything on their turn. Making time limit win/surrender is the only option.

Play any deck, put “Number 28: Titanic Moth” with the DL icon on the top corner in the Extra Deck. Play against AI with the parameter:

Add Random Bot, start the match. The error message will appear right away. 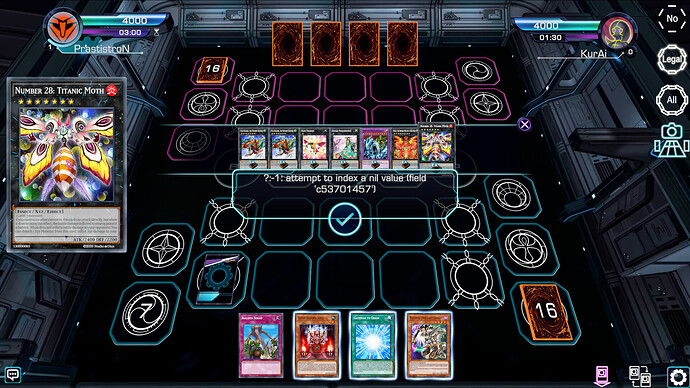 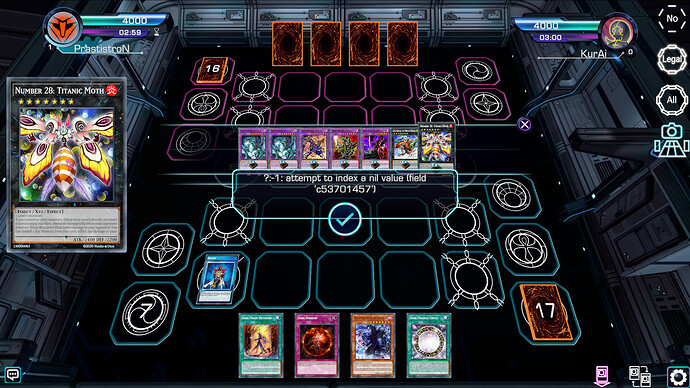 I can’t actually reproduce the bug as I can’t proceed to the next turn (or even managed in turn 1) to summon 2 level 7 monsters (which in this case “Charging Gaia the Fierce Knight”) to summon the card in question because of the bug. But I expect the card should not produce any error message that hinders the ability to play the game whatsoever.

When did you try this? Try it again and let me know if it still bugs against the AI.

I haven’t followed up with this issue until today, seems like you removed the DL version of the card from the game.

There’s no DL version since the effect of the card is the same. It just can be be used in DL.